This weeks project wasn't a load of fun.  It was too nice to build a new floor mat for my office - had to be outside.  It was cold but that was a good thing.  My project was to dig up the garden bed to prepare for planting.  I dug both the old one (which was easy) and the new one (which wasn't).

I live on glacial moraine.  That is the crap left over when the glacier retreats.  Not the good soil mind you but basically the rocks and clay.  To garden I've got to loosen up the moraine, break it up, put in top soil, and compost.  The first step is loosening up the soil.  I use a shovel (and at times an adze/pick combo made for breaking up concrete).  It's like digging rocks.  This is compounded by whoever was the developer for our neighborhood.  S/he basically used my yard to dump concrete waste and the stuff he excavated from other homes in the area.  I've got double the rocks. And concrete.  And old nails.

Last year I dug up the what is now, the old bed.  I then spent the whole summer trying to remove rocks and put down top soil while growing my garden.  I will say there are fewer rocks this year.  The new bed is a different story - it's like the old bed was last year.  Thought I was going to break the tip of my shovel.  So I'm done sweating and whining for a bit.  Here are the pics: 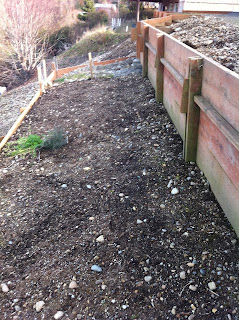 Upper bead after.  I know - doesn't look much different.  The plants appreciate it. 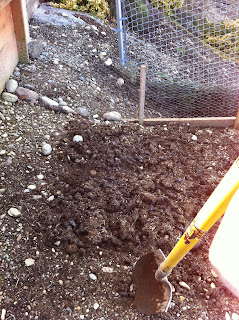 I tried using this beast but the shovel was more efficient. 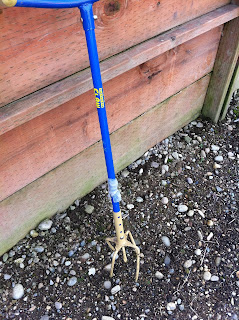 From a few weeks ago here's the before picture of the second bed. 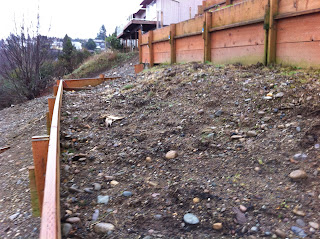 And here are the after shots. 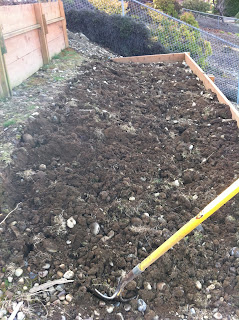 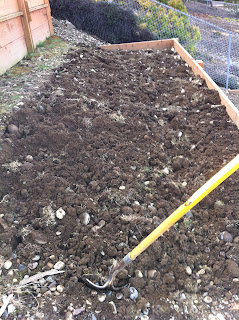 It still needs a raking and top soil - give me a week.  Off to stretch out and then a soak in the hot tub.
Posted by Ken Disbrow at 2:54 PM