We'd finished our patio and putting in some tiers in our steep backyard in the late winter of 2009-2010.  We still have more tiers to build on the other half of our hill...but there were enough.  I wanted to do something with the tier space.

My grandfather gardened and put up veggies for a family of 15 in his 20 by 40 foot backyard plot in downtown Trenton, New Jersey.  He'd have at least 3 harvests a year and end up with figs, tomatoes, peppers, oranges (yes he had an orange tree in Trenton), tons of greens, squashes of all shapes and colors,  onions, and even potatoes.  I remember being in awe of the neat rows of tidy bushes of all sizes and colors.  He maximized use of every square inch of his backyard.

So last year I tried my first garden in twenty-five years.  Previous attempts had been mostly failure but that was due to my laziness (I never weeded) more than anything else.

In March (of 2010) I ran to Fred Meyer's and bought about $100 worth of seeds (a real hodge podge of stuff) just to see what might grow.  I was pretty careful to document what I bought and what happened with each variety of seed.  I started a notebook and numbered each seed packet so I could track everything about my new garden.  I planted indoors early and guess what? The winter of 2010 held on and on and on and my indoor plants (most of them) fizzled out.

Sometime in late March (after I'd planted by indoor seeds) I found this book at Costco: 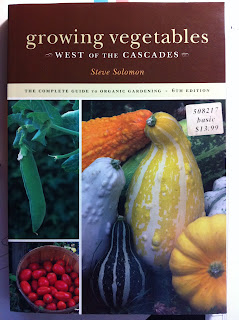 It discussed the unique climate I live in (Pacific Northwest), what works and what doesn't, and most importantly gave a city boy like me a clue about the importance of having a plan, planting schedules, weeding, cultivating the harvest, and soil preparation.  It created a real scramble for me (soil preparation - what's that?) and eventually I did get a decent garden out of 2010 but...well lets just say I learned a lot and could have done a lot better if I'd known 1/10 of what this book contains.  I wasn't going to be able to recreate my grandfathers garden in the pacific northwest but is is feasible to have a low maintenance garden that keeps you in greens (and even gives you some canning veggies) for five months a year.

This year is going to be different - I'm now a 2nd year amateur farmer and as part of my list of projects I've divided the garden up into (at least) 4 projects to write about: Planning, Preparation, Planting, and Maintaining.  This entry is about the first of those 4 projects: Planning.

The first step was to take inventory of last years seed.  Seeds can last several years if stored properly.  I'd carefully packed stuff up in a plastic bag, put a desiccant in the pack (moisture kills seed life) and stored it in the cool of my shed (heat is likewise not a friend of seed life).  Yesterday I dug out my notebook with the carefully scribed diary of the garden and headed off to the shed to pull out the seeds. 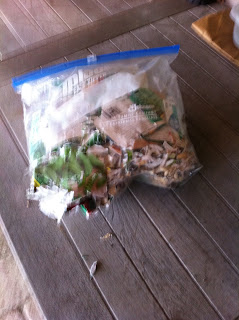 Aw Rats! Literally.  Rats had gotten into my seed packets and destroyed everything.  I couldn't tell bush beans from radish seed.  They'd even eaten the desiccant.  Lesson learned 1 & 2: Write down the seed variety in addition to numbering the packets AND store the seeds in a sealable metal container.

I have to start somewhere else.  Gonna measure the tiers and build a template to lay out the garden.  I'm doing a few things differently this year.  First I'm expanding.  I restricted myself to one tier last year (one of the few smart things I did).  One tier was a manageable space in which to learn and experiment but yet provided me with the reinforcement of a real yield.  This year I'm going to use the patio flower box for some herbs and expand to the second of three tiers.  I'll leave the third tier fallow this year - I intend to rotate tiers every 3 years.

Here's the flower box - we'll plan herbs first and Fran will fill the front edge with some flowers.  She does the artsy stuff - I'm into the meat and potatoes. 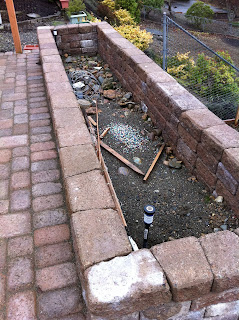 Here's the tier I "farmed" last year (lovingly titled "tier 1").  It's primed and ready to go.  We even did winter prep on the bed.  That's Fran in the picture.  Looks like I need to power wash the retaining wall - another project. 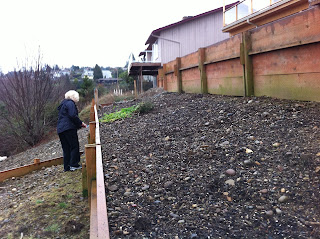 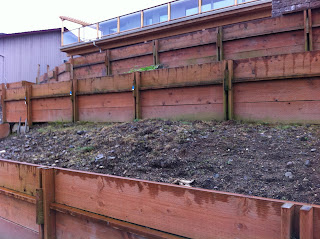 I've got to get the cap rail on my tiers this year (yet another project).  This one I probably should have done some fall prep work on.  Sigh - the 20/20 hind site of a year 2 amateur farmer.
We measured up the tiers (and flower box), found some graph paper, and I came up with this template: 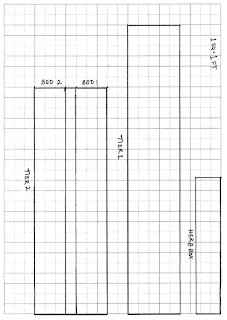 I was able to reconstruct most seed varieties from notes I took last year.  Here's what worked for me last year:
Herbs:
Salad Stuff:
Tomatoes (I over crowded tomatoes and let them get too bushy - will give space but trim this year):
Squash:
Vining Things:
Here's what didn't grow: Peppers of any kind - I don't know why - I tried bell, habanero, seranno, pablano, and jalapeno's. Nada, zip, nothing.  My neighbor got some great hot wax peppers and bell peppers so it's not the soil - it must be something about me.  I also did corn which worked but I felt pretty silly taking up 20 square feet of garden for 20 ears when I can buy it at 10/1$ at the height of the season at the local farmers market. We'll let someone else to grow our corn this year.
Here's what I don't know:  Rosemary, sage, and oregano.  I'd planted them on the edge of the garden and Fran accidentally weeded out my young plants.  Oops.
I made a pretty beginner mistake last year.  I way overcrowded things.  Not this year.  Plenty of space.  Here's the basic plan: 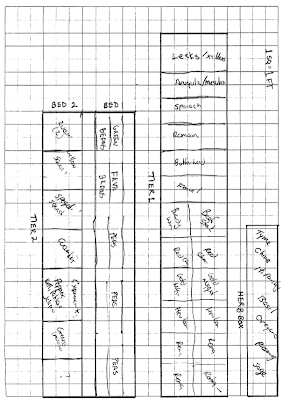 It includes the veggies mentioned above with the addition of fava beans and some experimental greens (mustard, cale and cabbage are my thoughts right now).  I've also got an experimental section (lower left above) that I might try some heirloom carrots - depends on the quality of seeds I can find.  We're doing mint in a separate pot because it's a weed and will take over everything.
This  is a La Nina year.  It's supposed to be cold in the northwest.  It's not.  It's actually be relatively dry and moderate.  Given that here's my tentative plan:
Late February
Indoors - do some cabbage and start my herbs
Sow peas, favas and spinach
March
Mustard (and any other asian greens) and chives
Indoors - tomatoes (all varieties),
Late March - more peas and green beans
April
Transplant herbs
Indoors - start fennel, and squash (including cucumbers)
Late - Leeks, Carrots
May
Lettuce
Transplant tomatoes, squash, fennel (probably late in the month)
This may vary based on the forecast but it is the plan at the moment.  In June, July and even early August I'll put in more lettuce, other greens, peas just so I have them all summer long.  I may come up with a more rigorous planting schedule but (year 2 amateur speaking) I think having a flexible schedule and basing plantings on the actual weather will work out better than trying to be too rigorous a planner.
I'll of course keep a journal of specific seed varieties and how things go.  I'll also update this site with progress.  I'm off to order seeds (on-line) now...I've been told I can get better seed quality on-line than I can at the Fred Meyer garden center store.
Posted by Ken Disbrow at 11:10 AM