Don't Panic! I'm not turing this into a cooking blog. I am a foodie and enjoy cooking but there are so many good cooking/foodie blogs out there I and my skills are so limited I just can't see contributing anything meaningful to the space.
That said every once in a while you stumble on/create a recipe so phenomenal you've just got to share it.
Last week I was having a craving for home made bread. I pulled out and dusted off the old bread machine. I tried 3 different recipes: the manufacturers, one from Julia Child's "Baking with Julia" cookbook, and one from the internet. All were less than stellar. They were soft and mushy and tasted of wet flour. Just not very good.
I asked around and one of my staff pointed me to this no-knead recipe from the NY times. Apparently among foodies this is the "go to" home made bread and was quite a meme for a while. I've got to get out more, I'd never heard of this.
This made significantly better bread than the bread machine (which is back collecting dust in the closet) but still not quite what I wanted. Further the loaf ended up being a bit small for my family. So my project was to figure out how to make this loaf bigger and better.
When cooking I find there are universally three ingredients that make any recipe better: Cheese, bacon, and beer. Now as much as I like bacon I've never heard of "bacon bread" (but I reserve the right to try that another day). But beer and cheese seemed like a strong combination. I thought if I replaced some or all of the liquid from NY times recipe with beer and threw in some cheese I might have a winner.
So some lessons from about 10 iterations.
Beer: Don't use only beer in the recipe. It doesn't work. The bread barely rose and it ended up tough and beery. My second iteration on the recipe used about 1/4 beer and 3/4 water (filtered - I didn't try tap water). It worked perfectly and gave the bread a tangier taste than water alone.
Cheese: Mild cheese becomes tasteless. Soft cheese separates leaving oily spots in the bread (so much for pepper jack bread). I finally settled on asiago though I suspect a good hard aged cheddar would work. Costco has both a hard asiago and an aged cheddar. Next loaf will be a cheddar beer bread.
I also varied the process a bit from the NY times recipe. I found if I mixed the cheese in when I made the dough it kept the bread from rising. So I made the recipe according to the article (with the exception of 1/4 beer in the liquid mix and changing the quantities - see below) but before the second rise (step 3 in the recipe) I put in about a cup of grated asiago and kneaded it into the dough. I flattened the dough, sprinkled it with some cheese, folded it over, and repeated the process until all the cheese was gone. This probably took 8 to 10 folds - I think this light kneading may actually have helped the recipe. I kept an extra 1/4 cup of cheese that I sprinkled on the top just before baking.
So here are the quantities and pic's from my process
Ingredients:
18 ounces of flour (about 3 and 2/3 cups - though I weigh it on a scale)
1/2 teaspoon rapid-rise yeast (I did not use instant yeast)
2 teaspoons salt
8 ounces filtered water
4 ounces beer (I used a mild beer here - I want to try it with a stout and cheddar)
1 1/4 cup asiago cheese 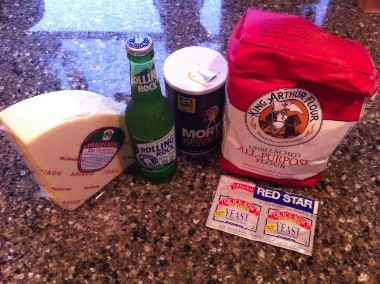 I also read from cooks illustrated that using a bit (like a tablespoon) of vinegar will improve the taste but I haven't tried it yet.
Steps:
The first step was basically measuring out and mixing the first five ingredients together. I mixed the dry ingredients thoroughly in a large bowl and then put in the liquid. The only issue I found was I only used about a third of the bottle of beer - if only I could think of something to do with the rest... 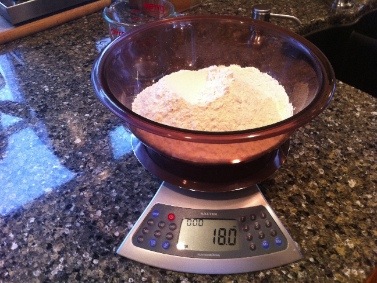 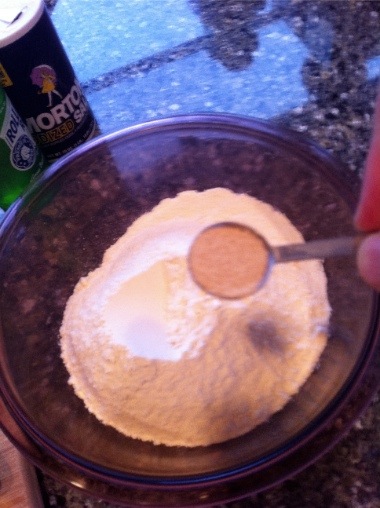 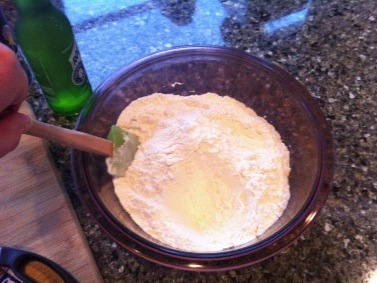 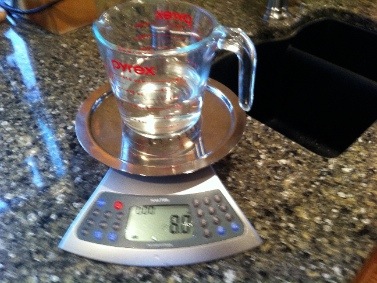 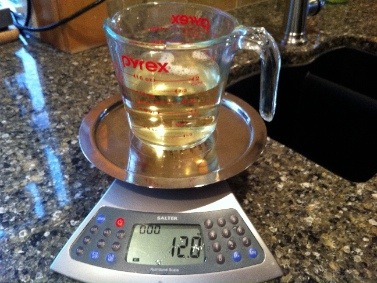 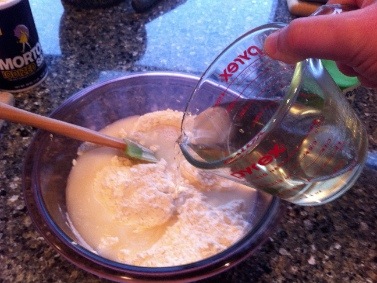 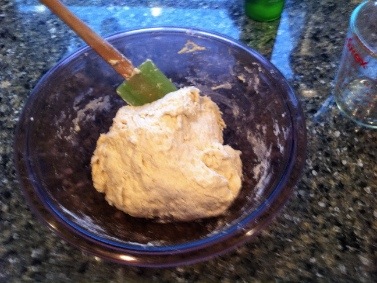 I then covered the bowl containing the dough with plastic wrap and let it sit overnight (I let it sit 12 hours). 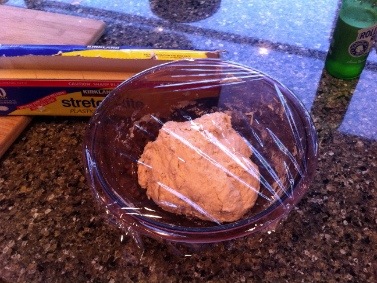 I removed the dough from the bowl and flattened it out. I then sprinkled a handful of the asiago, folded the dough, and repeated the process until I'd used 1 cup of the asiago. 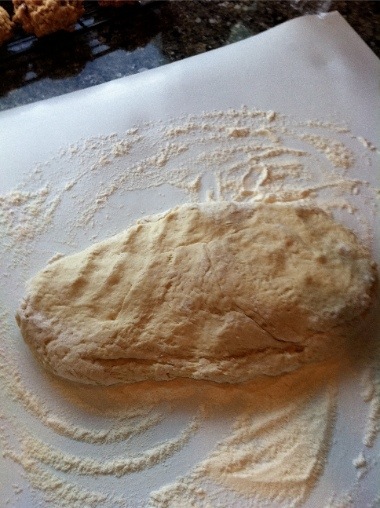 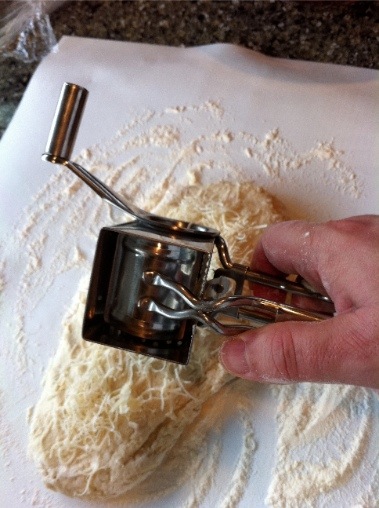 I put the dough on parchment paper (made it easier to put in the pot at the end) and let it rise for a few hours. 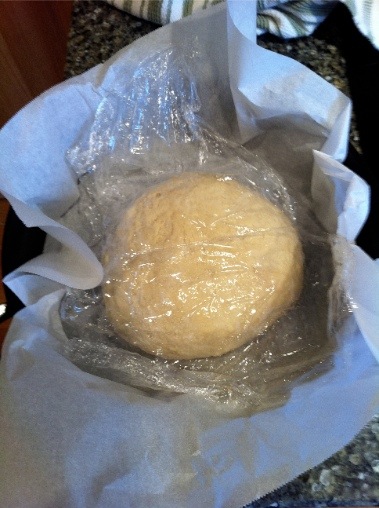 I preheated the over to 450 (as the recipe calls for) and stuck my #24 le creuset "round french oven" in. This is about a 4.5 quart enameled dutch oven. In about 30 minutes I (carefully) pulled out the hot french oven and put my dough in it. Note just put the parchment paper and dough in together - it's just easier (a trick I picked up from cooks illustrated magazine). 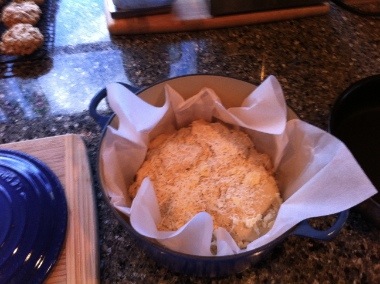 I slashed the top of the dough, sprinkled it with the remaining cheese, put the hot lid on, and popped it back in the oven. Following the instructions from the NY times I left it in the oven with the lid on for 30 minutes, I think because I made a bigger loaf, that I'll try 35 to 40 minutes next time. After the 30 minutes I took the lid off and let it go another 30 minutes (again I might increase this next time) until it was brown and sounded hollow when thumped. 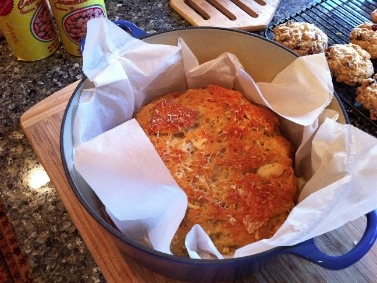 I pulled it out and let it cool. We're waiting on dinner right now to cut and eat it. 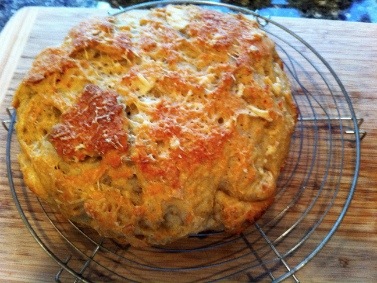